The Fires of Merlin 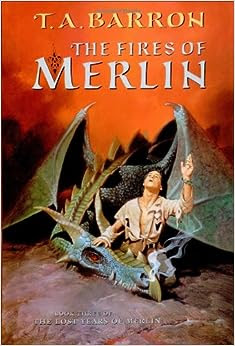 - Posted using BlogPress from my iPad
This is book three. I want to say that I really enjoyed it but I didn't. I like to read of Merlin's magical adventure in Fincayra. The story lost the middle somehow. Than at the end it picked up and got interesting again.
All this time that Merlin was grooming to be this spectular wizard time and time he seemed to be uncertain. I get it he is just a boy. But it gets me that he's naive most of the time. Merlin loses his powers all the time and doesn't realize they are within him. With the help of his friends new and old seizes to be the great wizard that he is born to be.
Besides Valdearg, (the wings of fire) would of turned out to be not so bad a dragon if he didn't die. There are some new characters Hallia and Earmon, who are brother and sister ( deer people) help Merlin along the way. Earmon although was a short lived character. And now the baby dragon who lost her daddy (Valdearg) from a bite from a kreelix.
Intresting passage at the beginning. Splendor of fire,swiftness of wind, I arise today, through the strength of heaven: Light of sun, radiance of moon, splendor of fire, speed of lightening, swiftness of wind, depth of sea, stability of earth, firmness of rock.
This is a passage from a seventh century hymn by St Patrick called The Cry of the Deer
A fondness of deer Patrick has, for when he was going to be killed. Druids saw a doe and fawn following. Saved his life. I guess in a way Patrick was trying to give back by getting rid of the dragons. What a shame for not many know that dragons are a magical bunch.
I'm rooting for Merlin. I know he'll get it someday. On to read the fourth book.
I give The Fires of Merlin 3 just because there was a big chunk in the middle that was disconnected.

Posted by Sheila at Wednesday, February 27, 2013 No comments: