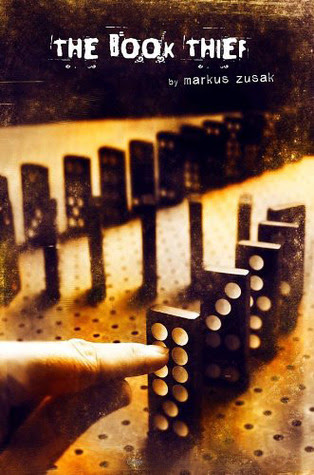 I liked this book very much. I didn't have one favorite character. It took me awhile to figure out that Death was the narrative part. I thought that was most interesting that it saw good and bad in humans, "I am haunted by humans." But it got a bit confusing at the end. The relationships that Liesel had with her "papa" and Max I feel were a good story. That is where the "book thief" is connected. Liesel was the "book thief without the words," How she learnt to read and even find common interest with Max who gave Liesel a whole new outlook on describing things. To go and write her own story.
For a good story, Jewish/German was a bit tame. And was glad to see that it was written that Liesel and Rudy finally knew more than was said how the people were treated. Seeing papa do a kind thing by offering bread crumbs. And later having the children do the same gives them a better look at was to be. It wasn't quite a strong ideal but gets the message across. I didn't give enough to "mama" but there in the end Liesel did have some nice things to say about her. In her own way mama did love Liesel.
The story had to end sadly. But to know Liesel does find someone important is comforting. What a shame. But of course it was all put together nicely. What does a book and an accordion have in common? They all tell a story. And you hear what it says.

I give The Book Thief 4

I feel that the background was a bit weak.

View my Guestmap
Free Guestmaps by Bravenet.com
Posted by Sheila at Friday, November 29, 2013 No comments: