Dream When You're Feeling Blue 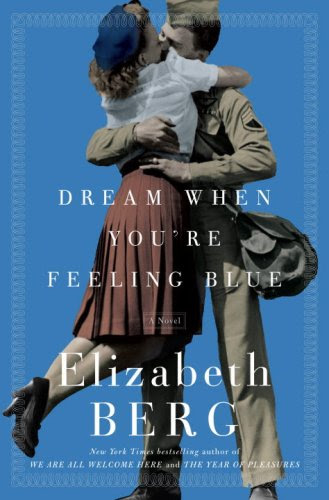 First time reading this author. The story was a very good one. Not too light and not too heavy. I think the way the author wrote about the war was telling all that there is to tell from a book that is a romance too. I remember the stories my father would tell me. Brings back memories. Especially when the letters that they write is always somewhere in ... My dad's was always somewhere in the South Pacific.
There was something that was said by one of the brother's in the story. He posed a good question. Is war a sin? It makes you think if someone is telling you it's bad to kill someone but the military goes in and things happened like that at times. It is confusing. And with that section I believe was answered a way that a young boy can grasp. Kudos for showing that the women can, and did make a difference. Kitty Heaney did just that. Knowing more about a wrench was more satisfying than doing girly things. She felt she was doing her part.
The relationship of the three sisters, Kitty,Louise,and Tish were strong. They're job to make the soldiers feel better was to write to them about anything. Along writing their boyfriends. Kitty did wonder if writing these boys did any good but her dad,Frank Heaney put it a good way. A soldier needs to believe, he needs us to believe in him. Don't show him by mourning the fact that he's not here. But by celebrating the life we are privileged to lead because of his sacrifice.
Even though relationships didn't work out. I really thought that the girls that eventually found the guys for them would end up with them. But the ending of story did change. I guess those sisters were strong and stuck together. And not to let it go unmentioned their mother,Margaret was a strong woman herself. With raising girls and boys. Six children dealing with eating disorder from her son,and a baby to beat. You have to lean on family to stay strong.

Was a bit confusing when author would write characters, all the children, as calling their parents, Margaret and Frank Heaney  as not part of their family but regarding them as passive caretakers.So that was different. I had no favorite character. All the characters were as equally good. Even the flames,Julian,Hank,and Michael  Other than that I enjoyed the story. Must of since I finished reading it faster than other stories. I wouldn't mind reading another of Elizabeth Berg's books.


I give Dream When You're Feeling Blue 5

This is a bookcrossing book and hope to send it along to another bookcrosser. Hope they like as I did.

View my Guestmap
Free Guestmaps by Bravenet.com
Posted by Sheila at Wednesday, January 08, 2014 No comments: