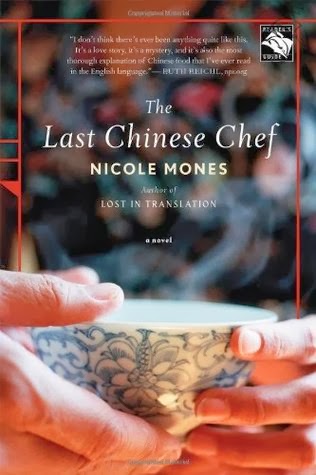 This was a book that I picked with a coupon I received from getting the Nook HD. Wasn't sure about the story but said what the heck never read anything from this author anyway.
I was very much pleased with this book. At first wasn't sure where it was going. A woman who lost her husband only to find out that he might have a child in China. As it moved on, Maggie the widow, went to China to find out what was going on. In the meantime she had a job to do with writing a food article of this man and his search to be like his family the last Chinese chef. Hmm.. the two met and well naturally I think what else? Romance.
But not so fast. As Maggie got to know Sam the chef, she also learned about Chinese cuisine, Chinese culture. Sam wanted the old world cooking. Even the tools were no longer available. Modern and clean. But is it really that much better? As Maggie interviewed Sam she learnt that boiling, steaming or stir-frying are preferred, in that order, stacking food to conserve fuel.
It didn't matter if chefs were rich or poor. It mattered that food was created for that person. It became an art. To know the diner, to perceive the diner. Feed the body and also the mind and soul. It's about community. It's about sharing!
Sam was translating his grandfather's book, The Last Chinese Chef to English, he was asked if he felt like the last Chinese chef. He answered maybe one of the last. He feels more optimistic than his grandfather. His grandfather felt imperial style would die with his generation. And so did his father think that also. Even the old fashioned gesture of taking a tea cup with two hands is sign of respect is noted to keep.
I found it interesting how American Chinese food isn't taken seriously as their own culture. Everything is short cut and doesn't take their culture of feeding the diner to heart

The story was laced with the hint of romance indeed. I really thought it was weird since I thought that Maggie was much older than Sam. Not until the end of the book that I found out that wasn't the case. Maggie weaved a place in Sam's mind. Even to the point that they were there for each other. Maggie with Sam's cooking (trying to be placed for the Olympics) and Sam being supportive for Maggie while and after she found out the child wasn't her husband's.  Just felt like a rebound relationship. But I'm glad I was wrong. First time in a long time that I actually read a story that was only hinting of romance, and food and culture came first right to the end. Of course Maggie and Sam got together. But in a respectful  and natural way.

I give The Last Chinese Chef 5

I wouldn't mind reading another story by Nicole Mones

View my Guestmap
Free Guestmaps by Bravenet.com
Posted by Sheila at Friday, March 07, 2014 No comments: